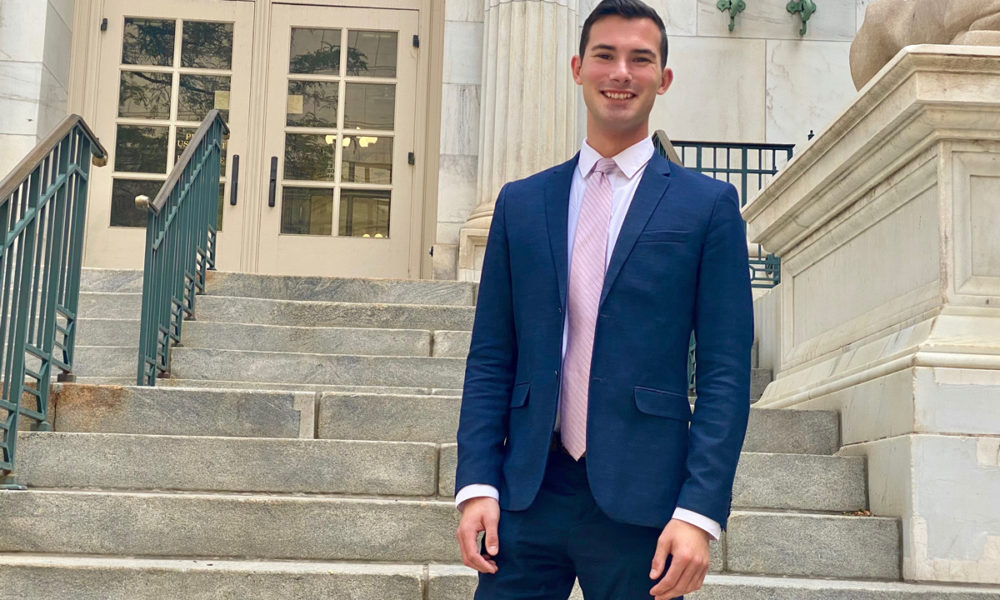 The 90-minute forum, which was co-sponsored by the D.C. Democratic State Committee, touched on topics ranging from anti-LGBTQ violence, especially hate crimes targeting transgender women of color; efforts to address homelessness faced by LGBTQ youth and seniors; the overall impact of D.C.’s high cost of living on the LGBTQ community; and whether LGBTQ-related curricula should be put in place in the city’s public schools.

Kurt Vorndran, a longtime D.C. gay Democratic activist and one of the Capital Stonewall Democrats’ former presidents, and Elizabeth Callanan Mitchel, a member of the D.C. Democratic State Committee, served as co-moderators of the forum.

The candidates participating in the forum, all of whom have been Ward 3 civic activists, included:

Monte Monash, CEO of the D.C. public affairs and communications consulting firm Monash Advisory Group and longtime Ward 3 community activist, was the only one of the Ward 3 D.C. Council Candidates who did not attend the LGBTQ candidates’ forum.

In keeping with D.C.’s long history of having mostly LGBTQ supportive candidates who run for public office, each of the eight Ward 3 candidates participating in the form appeared to agree with each other on their proposals for policies in support of the city’s LGBTQ community. None of them criticized or disagreed with each other during the discussions and several praised their fellow candidates for being knowledgeable and enthusiastic in their advocacy for LGBTQ rights.

At the conclusion of the forum, when Capital Stonewall Democrats President Jatarious Frazier asked each of the candidates if LGBTQ people were working on their respective campaigns as volunteers or paid staffers, each of them raised their hands to give a “yes” answer to that question.

Frazier said the April 25 forum was the first of five candidate forums the LGBTQ group would be holding between April 25 and May 11. The next forum, scheduled for Thursday, April 28, was to be for D.C.’s U.S. Congressional Delegate seat and for the so-called shadow U.S. Representative seat.

Frazier said that due to concerns over the COVID pandemic, the group decided to hold each of the forums virtually.

He said the organization’s voting members will receive an electronic ballot to cast their votes on which candidates Capital Stonewall Democrats should endorse beginning on May 1 and will have until May 15 to cast their ballots electronically. He said the group would announce its endorsements on May 17.

Similar to its practice in past elections for many years, a 60 percent majority vote will be needed in order for a candidate to win the organization’s endorsement, Frazier said. He said that if no candidate receives a 60 percent majority vote after two rounds of voting, no endorsement will be made for that particular race in the June 21 primary. Frazier said under club rules, an endorsement for a race where no endorsement was made in the primary can be made later for the November general election.

The April 25 forum, which was recorded on video in its Zoom broadcast, can accessed for viewing here: https://fb.watch/cEfNwZkAtF/

A Washington Blade transcript of the closing statements delivered by the eight candidates participating in the April 25 forum can be read below:

Thank you so much. I just want to thank you all for having us here. On my website you can read about my LGBTQ+ policy positions. I will mainly in my work on the Council make sure we reduce the number of LGBTQ+ homeless youth by providing temporary housing and wrap around services. I will advocate for support policies to protect and empower transgender sex workers. We didn’t get a chance to talk about that tonight. And of course, I support the Equality Act and an end to workplace discrimination. I view LGBTQ+ rights as similar to the other rights that are for other marginalized communities, including undocumented immigrants as well as of course people of color. And we all need to work together to make sure that our community is safe for everyone. Thank you.

So, I work on a whole lot of issues and honestly LGBTQ issues have not been at the top of the list of the things that I work on. I get educated on these issues in part from my children, in part from watching the world and in part from things like this. And this has been educational to me. I’ve been stunned by a number of the different things that have been raised here. And I would really want to be a partner to work on these issues with this group and with others in the community. I want to learn. I want to work with you, and I want to address these critical things that are out there. And all I can say is I offer myself as a partner to do and learn with you going forward. So, thank you very much.

Thank you, Capital Stonewall Democrats, for hosting and thank you to my fellow candidates for a great discussion. You know, I got into this campaign because I care about one thing. And that is dignity. We need to treat each other with dignity and respect. And we need to make sure our policies take into account the dignity of each person. And so, I’m not perfect. I don’t know everything. I’ve got a lot of proposals, a lot of ideas. But I’m not going to be right all the time and I appreciate partnering with you and learning and moving forward together. I think together, we can make a much stronger, much more just District. And I look forward to working with you as a Council member. My website is BeauFinley.com. And it has a number of my policies up. I believe at least as of about a week and a half or two weeks ago I was still the only candidate with an LGBTQ platform. So, thank you all for a wonderful evening.

Thank you, Capital Stonewall, and thank you Elizabeth and Kurt as Ward 3 Dems came strong today as both of you are on the Executive Committee. And as someone who has worked with the LGBTQ community as director at the Mayor’s Office of LGBTQ as well as Check It Enterprises. I would say I will continue to be a partner as the next Ward 3 Council member, as a bridge builder and as someone who continues in working in the neighborhood…I know nothing can be accomplished alone so I ask you to go to my website at PhilforWard3.com, and I thank you for having me today.

Thank you, Elizabeth. Thank you, Kurt. Thank you, Stonewall Democrats, for hosting. I think the thing that this whole forum focused on is how can we make a city that is inclusive, that is just, that is fair, that is beautiful, that is a loving place? And that means making the city affordable. That means making sure the city government works properly. One of the reasons why I’m running and one of the reasons I jumped in this race is that I think that we have a true crisis of epic proportions along one of the policy fronts. But one of the big problems is because we have a Council that is afraid to hold people accountable…They don’t want to ask hard questions. And that is on so many issues. And we need independent people to hold people accountable. That’s why I’m running. Please go to BenGergmann.com. You can read my policy plans. Go at the end of the week – we’re planning a relaunch of some stuff. But go now and go a few days from now as well. Thank you so much.

Well, I thank you. It’s just been a fantastic forum. We have all eight of us here. We’re strong Democrats who have been Democrats who have fought against the Trump administration and the hate that’s been there. And anyone of us would be a great advocate for the LGBTQ population here in the District and would fight hard against any hate that tried to get into this city. So, I think it’s great to sit on a panel with so many great people that we have today.

The one issue I just want to conclude with at this moment that we didn’t have time to speak about at the forum. So, in lieu of a traditional closing statement I’d like to just quickly mention employment. Because I think that is one of the biggest issues a Council member can tackle. For we see a gap, particularly with our transgender community still, even after efforts to try to close that gap. So, I’d like to work very closely with the Department of Employment Services to set up a training program where we make sure we connect residents – our transgender community, the LGBTQ community to jobs here in the city. And that involves having training programs that are culturally appropriate. And then making sure we have a list of available residents who want jobs. And then when employers come in — to help educate employers who may not understand the community. And to connect those employers to the residents who need jobs here in the District. Because the unemployment gap for our LGBTQ+ community, particularly the transgender community is still large here in the city and we need to do more about it. And I think that’s something a Council member can really get done here in the District.

Thank you for a great forum tonight. I feel like this is one of our best ones that we’ve had with the unique issues that the LGBTQ community faces. As your Council member, I would be a willing partner. I was very impressed with the advocacy that you have done on behalf of your community. I’ve been a lifelong Democrat. And a lot of my heart with the Democratic Party when I joined was that the government had a role in helping the marginalized. And that is my philosophy of government. So, you hear all these stories and specifics, and we need to get to work. We need to do better. And as your Council member I’ll do that. Thank you very much.

So, I’d like to make a closing statement to tell you about somebody very close to me. In preparation for this I’ve been speaking with LGBTQ students at my school because I know that myself specifically had the opportunity to speak with those students. One person who is a very close friend of mine is a trans woman. Her name is Eliana and she asked me to talk about her [inaudible]. So, I’m going to tell you a little about Eliana’s experience living in D.C. She loves having the opportunity to live in this city more than anything in the world. If you talk to her about it, her eyes light up the second anybody asks her what she thinks of D.C. But she’s scared because there is a lot going on.

There is a lot of anti-LGBTQ rhetoric going on. And nationally, there are a lot of anti-LGBTQ laws being passed. And for her to have to see that growing up – she’s only a year younger than me. Somebody growing up at almost 18, it’s a terrifying thing. And we should make sure that as a city that we’re stopping that from happening. That we’re making sure that we are an accepting place for anybody, no matter who they are, no matter what their gender, race, sexuality – any of that. We need to make sure that people like Eliana can stay in the city that they love and feel safe in the city that they love. To do that we have to radically reform our systems in order to better represent LGBTQ people.