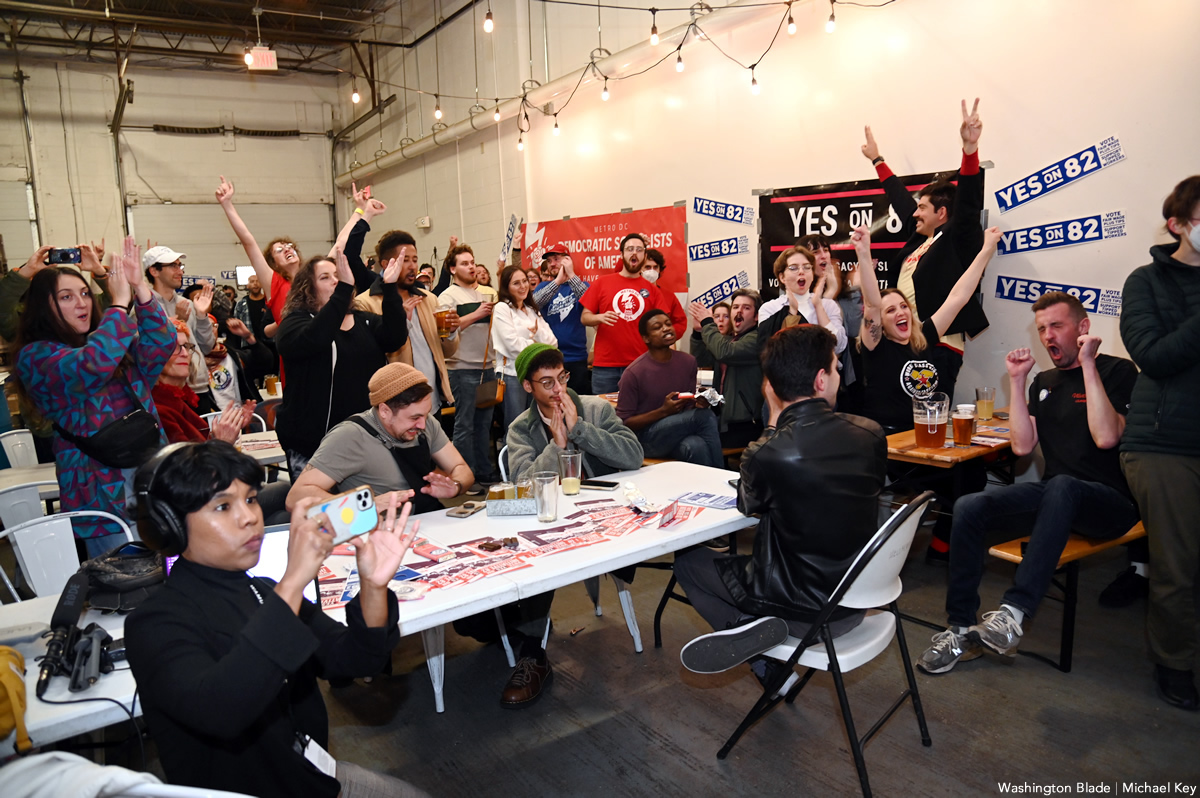 Ward 5 D.C. Council candidate Zachary Parker, who won the Democratic primary in June in a hotly contested seven-candidate race, won election to the Ward 5 Council seat on Tuesday by a wide margin, clearing the way for him to become the first openly gay member of the Council since 2015.

With the D.C. Board of Elections saying all but some remaining mail-in and drop-box ballots had been counted at around 11 p.m. on Tuesday, Parker had 93.67 percent of the vote compared to his Republican challenger, Clarence Lee Jr., who had 5.57 percent of the vote.

“Although they say the Democrat usually takes it in the general election, I didn’t want to take anything for granted,” Parker told the Washington Blade at his election night victory party. “So, I ran just as hard in the general as I did in the primary, because Ward 5 deserves it,” he said.

About 150 people turned out for the Parker victory party, held at the Cotton and Reed distillery and tavern located next to Ward 5’s bustling Union Market. Those who attended and who cheered loudly as Parker delivered his victory speech reflected the diverse coalition of Ward 5 residents, including many seniors, who worked on Parker’s campaign.

“Ward 5 is a melting pot. It’s a microcosm of the city,” he told the Blade. “And it’s incumbent on me to represent all of the interests of Ward 5 residents. It’s a duty that I’m honored to have, and I look forward to the challenge.”

Parker was among nearly all the Democratic candidates, including D.C. Mayor Muriel Bowser, D.C. Council Chair Phil Mendelson, and the Democrats running in Wards 1, 3, and 6 who were far ahead of their challengers and expected to be declared winners.

Also winning in a decisive vote was Initiative 82, the ballot measure calling for ending the city’s tipped wage system by raising the lower minimum wage for tipped workers, currently at $5.25 per hour, to the full city minimum wage, currently at $16.10 per hour, over the five-year phase-in period.

As of Tuesday evening, the “yes” vote on Initiative 82 received 74.1 percent of the vote, with the “no” vote receiving 25.9 percent.

The only race on the D.C. election ballot that appeared too close to call as of Tuesday evening was the race for the so-called non-Democratic at-large D.C. Council seat. Two of the city’s four at-large Council seats were up for election this year, with voters allowed to vote for two candidates. A total of eight candidates were on the ballot for the at-large seats, including incumbent Democrat Anita Bonds and incumbent independent Elissa Silverman.

Incumbent Ward 5 Council member Kenyan McDuffie, a Democrat who switched to become an independent, was also among the contenders for one of the two at-large seats.

Although McDuffie was ahead of Silverman by 8,925 votes, most political observers were reluctant to declare him the winner with an undetermined number of mail-in and drop box ballots yet to be counted.

The Associated Press, however, declared Bowser the winner, confirming her historic role of becoming the first woman to be elected to a third term as mayor of D.C.

As expected, two other gay candidates on the Nov. 8 D.C. ballot fell short of wining their respective races. Gay Libertarian candidate Bruce Majors had just 2 percent of the vote as of Tuesday evening in his race for the position of D.C. delegate to the House of Representatives. Incumbent Eleanor Holmes Norton, a longtime LGBTQ rights supporter, had 86.28 percent of the vote. Republican Nelson Rimensnyder had 6.05 percent and Statehood Green Party contender had 4.0 percent of the vote.

In the D.C. Council Chair race, Mendelson had 81.8 percent of the vote compared to Statehood Green Party candidate Darryl Moch, who had 9.5 percent and Republican challenger Nate Derenge, who had 7 percent.

LGBTQ activists in D.C. have pointed out that unlike many states across the country, where far-right Republicans are using LGBTQ rights, especially transgender rights, as a wedge issue to attack the LGBTQ community, in D.C., for close to 20 years, all candidates with any chance of winning have been strong supporters of LGBTQ rights, including Republicans and independents.

Because of that near universal support, as longtime D.C. LGBTQ rights activist Earl Fowlkes put it, LGBTQ voters have the luxury of deciding who to vote for based on non-LGBTQ issues. And in a city where the overwhelming majority of voters, including LGBTQ voters, are Democrats, the distinction between Democratic candidates who compete in Democratic primaries has been moderate Democrats versus progressive farther left Democrats.

Parker, whose positions have placed him in the progressive left faction of the party, appears to have drawn support from the moderate faction of Democratic voters after he won the Democratic primary, according to Ward 5 political observers.

Among the moderate independents who backed Parker this year is gay former D.C. Councilmember David Catania.

“I like Zachary very much,” Catania told the Blade. “I’ve had the opportunity to meet with him, to help fundraise for him. I’m enormously proud of him,” Catania said. “And I think he is going to be an extraordinary leader.

Catania spoke about Parker while he attended the election night victory party for Mayor Bowser. Catania ran unsuccessfully against Bowser as an independent when she first ran for mayor in 2014. Carol Schwartz also ran that year as an independent.

Sporting a Bowser for Mayor sticker on his shirt, Catania said he and the mayor have the strongly held view that those who compete against one another in elections should join forces to support the needs of citizens after the election is over.

“The mayor and I certainly have done this,” Catania said. “After she was victorious, she reached out to me to serve on a number of commissions and to chair a board and so on and so on,” he said. “And I made a promise the night that I lost,” he said. “I made all my supporters raise their hands and promise to support her.”