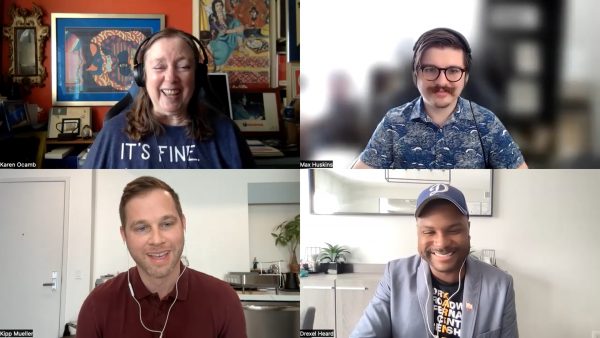 I choked up Election Night. For months, every waking and sometimes dreaming moment not devoted to my job was consumed by the image of democracy slipping like water through my clenched fist.

The historical imperative of the midterm elections forecast a MAGA Republican tsunami victory akin to the tidal wave in Tea Leoni’s “Deep Impact.”

After the Supreme Court overturned Roe v. Wade, stripping us of our fundamental right to bodily autonomy and threatening to overturn marriage equality and recriminalize homosexuality — which was met with the same kind of tisk-tisk reaction to decimating the Voting Rights Act — the path ahead looked strewn with more murdered and maimed bodies of women, people of color and LGBTQ people who couldn’t fit into a gilded glass closet.

Alarmed that the Democratic Party was not reaching out to our numerous intersectional LGBTQ communities for money, engagement, and votes as they had in the past, I felt an overwhelming compulsion to do something and coaxed my equally freaked out Millennial ally friend Max Huskins to create an LGBTQ-targeted YouTube series of candidate interviews and expert political prognostications which we would produce in partnership with the Los Angeles Blade.

We didn’t know if our Race to the Midterm series would make a difference — but at least me and Max were not doing nothing.

No matter the outcome, I knew we had to have knowledgeable experts to explain what it all means. I asked Drexel Heard, Black gay former executive director of the Los Angeles County Democratic Party who’s now a Democratic political strategist, and Kipp Mueller, who ran for state Senate in the Santa Clarita Valley area alongside Christy Smith in her 2020 run for Congress, to share their insights with us after the dust settled a bit.

I met Kipp while working on Senate Bill 1149, the Public Right to Know Act, which was co-sponsored by Public Justice and Consumer Reports, shepherded by attorney and Legal Ethics Professor Richard Zitrin, Kipp’s mentor.

Little did I know that the dust settling over the midterms was choking MAGA Republicans and allowing me, Max, Drexel and Kipp to exhale, exhale, breath deeply, exhale and laugh. By the time we recorded our Zoom session, the Democrats looked likely to retain the Senate and maybe, maybe, if California broke right — retain the House. What the hell! HISTORY was being made in defiance of Trump cultism.

“My honest takeaway is that the GOP is utterly lost,” Kipps says in our final episode. “My honest takeaway is that, despite all of the odds being in their favor, they’ve fumbled it. It’s amazing to me. And I have some unsolicited advice for the GOP: First, banish Trump. He’s a loser. He loses every time. He lost the popular vote in 2016 when he managed to win the Electoral College. And ever since then, he’s lost horribly — every single time. And the fact that they don’t see that on the wall blows my mind. He’s a total loser.

“And the second,” he continues, “is to start standing for things. To your point about what can we take from this (California Assembly) speaker negotiation and work it into. Well, I have some conditions on that. I’m open to that with Republicans. But I have some conditions — start proposing solutions; stop being a party of bizarre fearmongering about litter boxes in school bathrooms. And because they’re not going to survive the 21st century of being a party of 20th century lunatics, what do they even want? What do they stand for — other than tax cuts for the rich? We know who they don’t like. We know who some of them hate. But what do they even want? I can’t even answer that …

“They’re just visionless bullies right now. And it’s only going to get worse because they might eke out a slight majority in the House, and then they’re going to have to kowtow to the likes of Marjorie Taylor Greene and Lauren Boebert and Trump. And they’re going to lose horribly again. So my unsolicited advice to them is — become normal again.”

Max opined “that, hopefully, the future is looking brighter than expected, at least from our perspective here, because of Millennial turnout and the Gen Z turnout was pretty damn strong. Young people showed up to the polls and showed up to vote for important issues that pertain to all generations.”

Their most pressing issue, aside from student loans and climate change?

“Women’s rights to bodily autonomy, for sure,” Max says. “I think that was one of the drastic social problems that we’re facing this time around, that people were motivated to go out and vote.”

“Overturning Roe was a huge motivator for Democrats to come out, for independents to come out and vote,” says Kipp. But (gay pollster) Nate Silver found that in the states where people felt like these rights were more protected, it less directly influenced turnout and people showing up.”

I noted to Drexel that both Mark Gonzalez and Tony Hoang strongly advocated for Proposition One, which would codify reproductive rights in the California Constitution (it passed.)

“I think a lot of folks pushed Prop One to make a national stance because as California goes, so goes the nation,’ Drexel says. “So, if California is making the big push, it is going to be at the forefront of voters’ minds. One of the things that I have said about not just Prop One is about our Democratic messaging on since Dobbs (the case the Supreme Court used to overturn Roe and abortion rights) has been making it an economic issue, not just a reproductive freedom issue … We cannot separate Roe v. Wade from how it impacts the economy.

These are just some of the issues we tossed around in our casual, free-flowing conversation about the midterms and what might happen next. My thanks to Drexel and Kipp for the smart fun.

But after we wrapped the interviews, Max mentioned an Oregon initiative that I knew nothing about — Measure 112, “a change to the state’s constitution, stripping language that for more than a century has allowed for slavery and involuntary servitude as punishment for a crime,” according to opb.org.

“Removing language referencing slavery from the Oregon Constitution is a good thing and is long over due,” state Rep. Travis Nelson (D-Portland), who won election Tuesday as state’s first Black, openly LGBTQ lawmaker, told OPB. “It’s a big number … That’s troubling to me.”

“This was a state that was meant to be a white utopia and was not welcoming to people who were not white,” Nelson added. “Given the history of Oregon, the results that have come from Measure 112 are disappointing, but not incredibly surprising.”

“We have conversations all the time about our Oregon values, and now we know that there’s a segment of the population that values slavery being a form of punishment,” Jennifer Parrish-Taylor, director of advocacy and public policy at the Urban League of Portland, which backed Measure 112, told OPB. “That’s a hard conversation, but I think it’s also reflective of the broader national conversation that we’re seeing just in terms of this rise of white nationalism, of racial hatred that’s happening, folks feeling further and further isolated and disconnected from each other.”

Oregon Democratic Senator Jeff Merkley has introduced legislation that would addressed language in the U.S Constitution’s 13th Amendment that has similar exceptions for slavery as a criminal punishment. “This horrific loophole in our Constitution is a moral abomination that launched the mass incarceration we see continuing to this day,” Merkley said at a news conference. “[T]here should be no exceptions to a ban on slavery.”

I know some folks in the Deep South still love their Civil War Confederate soldier monuments. But it never occurred to me that so many Northerners would find an excuse for any exception to an outright ban on slavery.

We have so much more work to do.