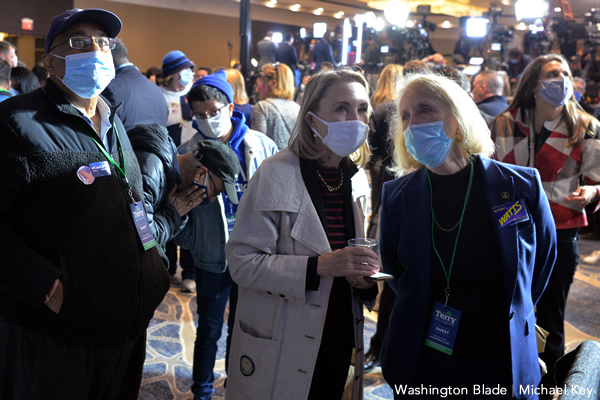 Two teens walk into a high-school classroom during period change. While the teacher yells at them, they rip a Pride flag off a wall then sprint through a crowded hall.

They outrun the teacher and disappear. Soon after, several students film themselves crowding into a school toilet cubicle as they try to flush the flag. When they fail, one of them drops his pants, squats, and defecates on the flag while the rest of them laugh and shout homophobic/transphobic slurs.

This happened in September at Paso Robles High School outside central California’s San Luis Obispo, which dubs itself the “Happiest City in America.” Soon the whole student body was buzzing. Most of them watched the video, which got posted to TikTok, but administrators did not respond for two weeks, saying they were unaware.

The incident surprised nobody.

LGBTQ students at Paso High say the region’s famed happiness doesn’t include them, writing in an editorial that they feel constantly targeted and harassed at school. They’ve told a reporter at the San Luis Obispo Tribune they don’t feel safe, that they face bullying and hatred every day. Sophomore Eve Barajas, president of the school’s Equity Club, says “micro aggressions” are common but physical violence is a real problem.

They didn’t expect leadership to validate the bullying, but that’s what happened. In an interview, Paso High teacher Geoffrey Land called the defecation video, “an act of hate directed at the LGBTQ community,” adding, “And a lot of students felt it, you know, felt that attack very acutely.” He expected administrators to take the strongest possible stand against bullying.

Defecating on a symbol of inclusion is an act of hatred. The symbol isn’t the problem, the hatred is. Banning the symbol endorses the hatred.

So did science teacher and swim coach Evan Holtz, the man who chased the bullies down the hall. He told reporters he wants LGBTQ students to know they’re safe with him and can come to him for support. That’s why he and a few other teachers used to display Pride flags in their classrooms, a popular custom in schools around the U.S., where over half of all LGBTQ students report being bullied, according to a new survey conducted by the queer youth advocacy organization The Trevor Project.

They report that contrary to popular narrative, anti-LGBTQ bullying in U.S. middle and high schools has been getting worse in recent years instead of better, and that the bullying often equals acts of physical violence.

In a very recent example, 13-year-old transgender student Ian Ring was badly beaten by bullies at his school in Spokane, Wash., while a crowd of students looked on, laughed, and filmed. Local police have charged one student with misdemeanor assault, but Ian’s mother says she doesn’t know how to keep him safe. She’s considering homeschooling.

Back at Paso High, Coach Holtz says he was happy three students brought him replacements for the stolen Pride flag. He hung one on his classroom wall, but that’s when the other shoe dropped. District Superintendent Curt Dubost banned the flag, not the bullying.

Dubost sent a letter to teachers saying he opposes bullying, then ordered them to remove any LGBTQ Pride flag bigger than two feet by two feet, which students say is an effective ban, noting almost all commercially available flags are larger than that.

The ban is the ONLY action Dubost announced. He announced no comprehensive anti-bullying programs and no plans to make life better for queer kids in the schools he runs.

In a later interview, he claimed rainbow flags are partisan like “Blue Lives Matter” flags supporting police officers. He did not cite any incidents of teenage police officers being bullied in school or needing to know where they can find support from teachers. Queer students’ jaws dropped at the inanity of his message.

Jaws dropped harder over Dubost’s statement that LGBTQ Pride flags “mean different things to different people,” which students and teachers say they received as an overt endorsement of anti-LGBTQ hatred. In what world, they ask, should a symbol of love, safety, and inclusion mean something different? To add insult to injury, students say the bullies who stole the flag and posted the TikTok received only “minor discipline.”

The upshot is that anti-LGBTQ bullies sent a message of hate, got a slap on the wrist, and then saw their message validated and actively enforced by the school district.

Paso High Senior Danny Perez reacted like this: “My identity has been politicized. Someone defecated on a Pride flag. So the school takes away the Pride flag, not the homophobia?”

Superintendent Dubost threw away a fantastic teaching opportunity, but students aren’t letting it slip by

Students have announced that in cooperation with Paso High’s performing arts department, they will hold a “ Coming Out Against Hate” community forum in the high school auditorium. Local news media have cooperated with a blitz of free publicity.

LGBTQ students will “share their experiences and visions for a more welcoming, inclusive educational environment,” in person and via a self-produced short film. They say they will focus on personal stories about bullying they face in school. Superintendent Dubost did not respond immediately to an email asking if he would attend. No students are required to attend the forum, which is taking place after school hours and is not an official assembly.

Meanwhile, LGBTQ and allied students have been plastering school walls with rainbow-themed posters and drawings filled with messages of love and support.

LGBTQ students, especially transgender students, are facing a rising tide of bullying and violence in U.S. schools. Even on the coasts, queer kids are struggling. San Luis Obispo and Spokane are not as politically liberal as Los Angeles or San Francisco, but they’re still “left coast” communities with reputations for tolerance and acceptance.

Nothing is going to get better unless we work together collectively against the insidious notion that LGBTQ identity is or should be controversial. The Paso Robles High School community is doing a great job educating students and parents as they send their superintendent a strong message that he must do better.

What about you and your community? What can YOU do to stem a rising tide of hate?

James Finn is a former Air Force intelligence analyst, long-time LGBTQ activist, an alumnus of Queer Nation and Act Up NY, a regular columnist for queer news outlets, and an “agented” but unpublished novelist. Send questions, comments, and story ideas to [email protected].