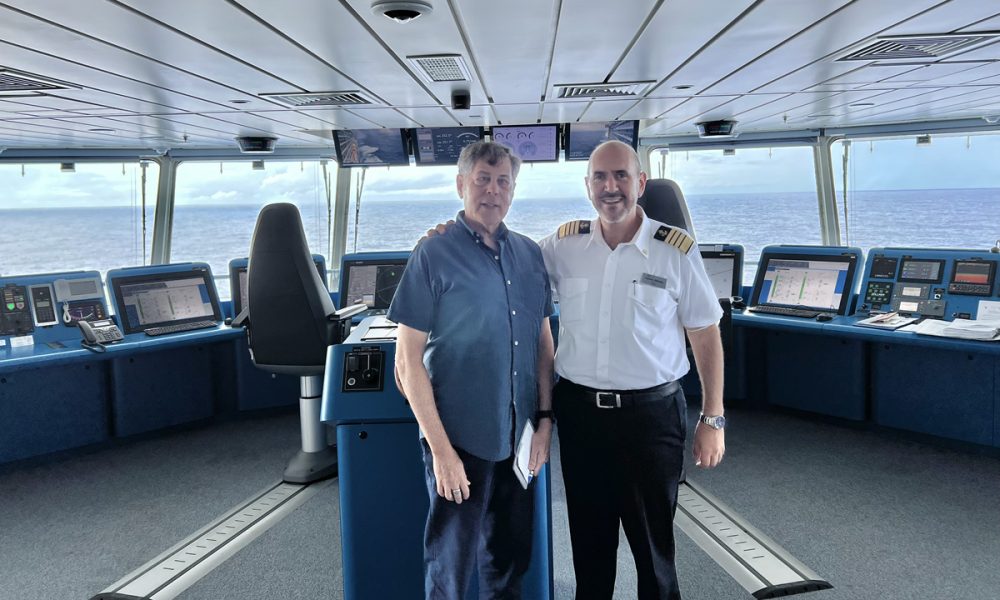 Woke up with a phone call telling me my coffee, juice and bagel were being delivered to the room on day 3 of my trip. My shore excursions begin today.  I was scheduled to leave the ship at 10:00am for five hours in Valencia for a tour of the city and a taste of some Spanish food. We had a knowledgeable guide who regaled us with the history of the city. The food stops were a little messed up as there were other tour groups stopping before us at the same places and the timing was off. But that didn’t stop us appreciating the city. My first time in Valencia had been nearly 50 years ago during a three-month sojourn in Spain. It was a lot more crowded today and it has been urbanized like so many cities. But I think they have done a great job in keeping the wonderful feeling of the city. What was beautiful to see was the new science center with the beautiful architecture by Santiago Calatrava. After a two-hour walk-in town, we met the bus and headed back to the ship. I decided it was time to head to the gym for a little time on the lifecycle and some weights. My trainers at FIT, Naldo and Juan, would have been proud.

Then it was off to a Halloween Party hosted by Scott and Dustin in the Iconic suite. The costumes were great. I was lazy and not being a big costume person just wore a Hawaiian shirt and sunglasses and went as an old tourist. It was a fun party, then dinner at Luminae, the restaurant in the Retreat. Then the highlight of the evening the incredible show in the APEX theater with Andrew Derbyshire. I will talk more about Andrew in a later blog. I interviewed him during my cruise last year and he is just a fun person, aside from being a brilliant talent.

Day four dawned bright and sunny and we headed into the Port of Malaga. Since we weren’t scheduled to leave the ship until 1:00pm I headed to the gym early and then sat on the retreat terrace and sipped a cappuccino. A really tough life, but then someone has to lead it, so why not me?

Malaga is a beautiful city on the Costa del Sol. We toured the Alhambra and cathedral. I realized I had forgotten my phone on our bus and had to wait until after the tour to retrieve it. It was weird not having it in my hand but in a way kind of liberating. Any pictures I wanted friends were taking and would share. We didn’t have to be back on the ship until 9:30pm so after the official tour we stayed in Malaga and had great drinks and tapas, enough for dinner, at a restaurant owned by Antonio Banderas called Bodega El Pimpi.

Then back to the APEX for two great shows that evening. The entertainment onboard is really great. One show in the theater with dueling guitarists and then to the CLUB for Caravan, a carnival extravaganza with singers, dancers and acrobats of Cirque du Soleil caliber. Then off to bed to prepare for tomorrow’s visit to Gibraltar.

Day five of my cruise again dawned bright and sunny. Today was exciting for me as it was the first stop on my trip to a place I hadn’t been before, Gibraltar. It wasn’t as if I hadn’t tried to go once before. In 1972 while on the Costa del Sol, I traveled down to Algeciras only to find that Franco, who was still ruling Spain, had dug up the road to Gibraltar over a fight with the British. So, it has taken me this long to go see the Rock and the wild Barbary Macaques. They didn’t disappoint.

It was a great day traveling the Rock and seeing the siege tunnels and the monkeys. A ride on the cable car to the top of the Rock was also great and the view spectacular. Then back to the ship for another evening of food and entertainment. The daily schedule given out each evening in every cabin lists an LGBTQ+ get together at 6 pm in Eden; one of the better bars and lounges on the ship. Each evening I meet more and more members of the community, those traveling in my group and so many others.

There is now another sea day to look forward to before our final stop in the Azores. Then we head to sea for seven days. Sea days are lazy days for me. Writing, reading, the gym and just sitting with friends drinking and eating. I enjoyed the retreat bar and headed there with a group for a burger for lunch. That evening we saw Andrew Derbyshire’s second show, and then headed to Le Petite Chef for dinner. It is a fun meal with a story playing out on video on your plate, and on the table in front of you. I hear they will open a place in DC and it is worth a visit for the fun of it. Then it was an early night for me and we turned our clocks back an hour, so I was actually in bed by 11.

Friday, day seven of the cruise, dawned bright but we understood the weather would begin to change as we headed to the Azores. We docked late in San Miguel, it was 3:00pm, and the fog was rolling in and it would be dark by 6:00pm. So while we had hoped to see the lakes, one green and one blue, from the top of the crater, all we saw was fog. A reminder one doesn’t control the weather. We did have a nice stop to taste Azorean wines and cheeses at a beautiful hotel in Ponta Delgada. Then back to the ship to begin our long sea voyage across the Atlantic. It was a little disconcerting to arrive back on the ship and find ‘barf’ bags all over as they were anticipating rough seas for a couple of days. All the balcony furniture had been moved into the room. The Captain explained how he would try to avoid the worst of the storm. As it turned out the night wasn’t bad at all and the morning brought clearing skies.

The past six sea days are really the most fun of my transatlantic voyage. Days of just looking out at the beautiful ocean. I would start each day with a room service breakfast. I would put my breakfast order on the order form, out on the door handle before I went to bed and my butler, Simon, would deliver it at the time in the morning I requested. For me that was 7:00am. I would have a bagel, juice, fruit and coffee each morning. I will miss Simon’s knock on the door my first day home, which won’t come.

And before you ask, yes everyone in the Retreat is assigned a butler to help with any little issue you may have. After breakfast I would write for two hours. These blogs, my columns for the Blade which I had a hard time sending because of the terrible internet, and a final edit of my book before it is due at the editor on Nov. 15.

Now there is plenty to do on sea days on the Celebrity APEX if you want to be active. You can attend lectures on various topics, play bingo, run on the track or head to the fully equipped gym for a workout on your own, or go to exercise classes of various kinds. I actually have gone to the gym every day for about an hour split between the lifecycle and weights. Then there is the casino if you are so inclined. One of the group I am traveling with told us he won nearly $1,000. He didn’t mention if he lost much before he won, but then that doesn’t count.

Each day after the gym I would spend an hour at the Retreat lounge with a cappuccino and some good conversation.

One day I went to an interesting session “behind the scenes of the APEX theater.” It was there I met Nate Promkul, an incredible singer and actor who told me his dream is to be on Broadway. I predict his dream will come true. The APEX theater is the most advanced of any ship with a multi-million-dollar screen that provides amazing backgrounds for all their shows.

Most afternoons I would head to the Retreat sun deck to read but would end up in some interesting conversations, often about politics. Remember, we were in the middle of the Atlantic during the election and yes, everyone had voted before they left home. Then I had the opportunity to do an interview with the Captain on the bridge, and another with the cruise director, both of which will be in future columns.

One can’t forget all the food and drink consumed. The food onboard is generally good and there is a great variety to choose from. Anything from bar-b-que at the Rooftop Garden Grill to sushi at Raw On 5. There are four regular restaurants where you can eat your meals and they are included in your cruise fare. There are specialty restaurants for which you pay a little more for a meal. There is one restaurant reserved for guests in the Retreat, Luminae and I ate there a number of times. One of the specialty restaurants I really enjoyed last year on the APEX was Eden. We ate there a number of times this year but I give it mixed reviews.

Last year’s chef was no longer there. Then there is the Oceanview Café, the huge buffet, open all day. If you can’t find food you like there, everything under the sun including pizza, you are hopeless.

Sea days have gone by quickly with great entertainment every night in multiple venues. Last night there was ‘silent disco’ in the Martini Bar. This morning I woke to calm seas as we approached our last stop, Nassau. I will stay on the ship and enjoy it for a final day. Tomorrow morning when I wake up, we will be docked in Ft. Lauderdale and my transatlantic cruise will be over. I will definitely miss the Celebrity APEX and its wonderful crew, and all the friends, new and old, who traveled with me. But I can look forward to seeing them all again next October when we embark on the Celebrity BEYOND for our 2023 transatlantic voyage.