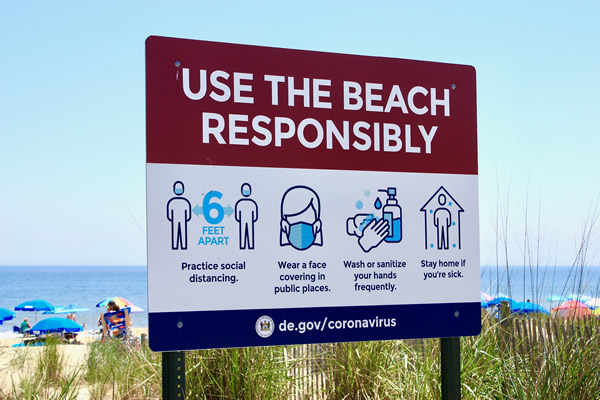 Rehoboth Beach, a plea to get your COVID act together

As a lesbian, it’s painful to reflect on Dole’s often anti-gay voting record. But, as a disabled person (I’m legally blind), I mourn the loss of a disability civil rights hero.

Dole was of the “greatest generation.” He became disabled (spending three years in the hospital) while fighting in World War II.

That war was our, great-grandparents,’ grandparents’ and parents’ war. It sometimes seems remote to younger generations.

Yet, without sentimentalizing the “greatest generation,” Dole’s death is a reminder: the fight against Hitler was essential for democracy. Life would be terrifying if Hitler had won.

Yet, there’s no way to forget that, as the Blade reported, Dole’s anti-gay record is part of his legacy.
Like many of his time, whether Democrat or Republican, I suspect, he was uncomfortable with queerness.

In 1996, trying to win props from conservatives, Dole became the first co-sponsor of the Senate version of the Defense of Marriage Act (DOMA). Until it was struck down by the Supreme Court in 2013, DOMA prohibited same-sex married couples from receiving federal benefits, and allowed states to refuse to recognize same-sex marriages from states where same-sex marriages were legal.

Dole’s legacy is complex. It’s unfair to write him off as a homophobic politico.

Legions of disabled people, queer and non-queer, remember Dole not only as a disability rights hero, but as a member of our tribe.

One afternoon in the early 1990s, I visited the Smithsonian’s National Museum of American History. Walking through the lobby, white cane in hand, I heard a voice say “hello.”

I realized that U.S. Sen. Bob Dole (R-Kan.), then Senate Minority Leader, was saying “hi” to me.

Dole wasn’t greeting me because I was important. I’m not a movie star, world-class athlete, politician. Dole wasn’t running for office. This was before he ran unsuccessfully for president against Bill Clinton.

Dole spoke to me because he saw that I’m disabled.

Sometimes, non-disabled people, queer and non-queer, will chat with me out of pity, discomfort, fear or, out of a “savior” mentality.

“It’s so sad that you have to live like that,” they’ll say.

“Let me help you!” the “saviors” insist, holding my shoulder, grabbing my cane, when I’m crossing the street. (I know how to get around safely. Their “help” endangers my safety.)

Dole chatted with me because he felt a kinship with and interest in the lives of people with disabilities.

Dole knew what it was like to adapt to a disability. He’d hold a pen in his fist to discourage people from shaking his hand and stay away from political dinners because he couldn’t cut his meat due to his disability, The New York Times reported.

Like many with disabilities, he knew what it was to be scorned for being disabled.

Years after I met him at the museum, I interviewed Dole for “Independence Today,” a (now defunct) disability paper. He remembered, he told me, when in the years following World War II, “people would cross to the other side of the street if they saw me walking around.”

Decades later, Dole, motivated by his personal experience, was instrumental in the passage of the Americans with Disabilities Act (ADA).

There is still much disability-based discrimination in everything from employment to accommodations (libraries, courts, etc.).

It’s hard for many to imagine what it was like to be disabled in America before the ADA. If you weren’t hired because of your disability or excluded from a restaurant or hospital if you were disabled, you had no legal recourse.

Words can’t express how the ADA (from wheelchair ramps to sign language interpreters to Braille menus) has changed our country.

This landmark civil rights law has benefitted everyone from breast cancer survivors to people with AIDS to schoolchildren.

For the “ADA generation,” those born after 1990, the law has established expectations of equality for disabled people.