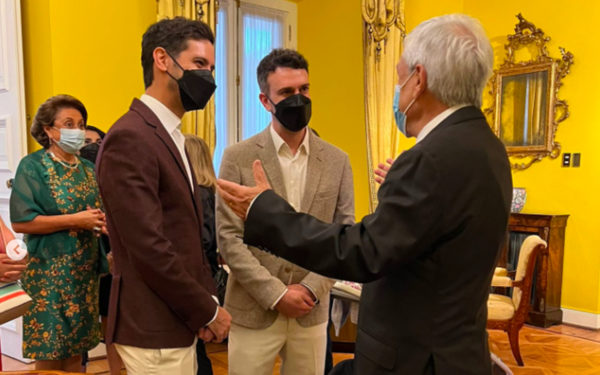 Will we support all LGBTQ candidates in 2022?

SANTIAGO, Chile — I was on the steps of Cambridge (Mass.) City Hall on May 17, 2004, when the first same-sex couples legally married in the U.S. I was inside a Chilean Civil Registry and Identification Service office in Santiago, the country’s capital, nearly 20 years later when the first same-sex couple legally married in the South American country.

Javier Silva and Jaime Nazar, a gay couple who has been together for seven years, married on March 10 as they held their two young children. Then-Chilean Justice Minister Hernán Larraín, then-Deputy Human Rights Secretary Lorena Recabarren, two prominent Chilean LGBTQ rights activists — long-time Movimiento de Integración y Liberación Homosexual (Movilh) Director Rolando Jiménez and Fundación Iguales President Isabel Amor — Hunter T. Carter a U.S. based lawyer who advocates for marriage equality throughout Latin America and this reporter were among the dozens of people who were in the room to witness this historic moment.

Consuelo Morales and Pabla Heuser, a lesbian couple with a young child who has been together for 17 years, married in the same room less than half an hour later. Both couples, Larraín, Recabarren, Jiménez and Amor spoke with the dozens of Chilean reporters who were inside the Civil Registry office after the weddings took place. Well wishers cheered and threw flower petals at the newly married couples as they left the building.

My husband happens to have been born and raised in Santiago, so the country’s first same-sex weddings were more than just another story to cover. March 10 was a watershed moment for one of Latin America’s most conservative countries. It was also a demonstration that progress is possible in the most unexpected of places.

Divorce only became legal in Chile in 2004. Abortion remains largely prohibited in the country, although a bill that would allow a woman to terminate her pregnancy up to 14 weeks has begun to work its way through the Chilean Congress.

Chile on March 10 joined neighboring Argentina and less than three dozen other countries around the world that have extended marriage rights to same-sex couples.

How did Chile achieve such a historic milestone?

Movilh in 2012 filed a lawsuit with the Inter-American Commission on Human Rights on behalf of three same-sex couples who were seeking marriage rights. The Inter-American Court of Human Rights that same year ruled in favor of Karen Atala, a Chilean judge who lost custody of her three daughters to her ex-husband because she is a lesbian.

The Atala case established a legal precedent that has been used to advance marriage equality throughout Latin America.

Chile’s civil unions law took effect on Oct. 22, 2015. I happened to be in Santiago with my husband, his niece and her husband on that day. The activists with whom I spoke on one hand welcomed the civil unions law, but on the other stressed it did not sufficiently protect same-sex couples and their children.

The government of former President Michelle Bachelet — who is now the U.N. high commissioner for human rights — in 2016 said it would introduce bills to extend marriage and adoption rights to same-sex couples as part of an agreement it reached with Movilh and the Inter-American Commission on Human Rights. Movilh in 2020 withdrew from it after accusing then-President Sebastián Piñera of not doing enough to advance marriage equality in Chile.

Piñera last June announced his support of the issue.

He met with Silva and Nazar on March 10 at the Presidential Palace in Santiago after they married. The meeting took place on Piñera’s last day in office.

“‘Two people’ — these words change life, history. They solidify the dreams and aspirations of many,” said Atala on March 10 in a tweet that included the new definition of marriage in Chile. “A dream that became a reality today. I cannot be happier.”

“Javier and Jaime’s civil wedding was simple but enormously important,” said Carter earlier this week after he returned to the U.S. “This short legal proceeding has been enjoyed by millions because it protects the couple and the children they may have. It should not have required a decade of litigation and often intense negotiations backed by the Inter-American Human Rights Commission to get to this day of joyful tears and rosy cheeks, but love always wins.”

March 10 was the day that Chile legally recognized Javier and Jaime, Consuelo and Pabla and their families. March 10, as Carter notes, was the culmination of a long and at times painful effort to ensure LGBTQ Chileans could receive the same rights and privileges of marriage about which their heterosexual brothers and sisters likely don’t think twice. March 10 was also a day that my husband and many others who were either born in Chile and/or live in the country likely never thought would happen.